Are you concerned about climate justice? If so you might be interested in joining a new Interfaith Group who will work together on issues relating to the environment, at this important time leading up to COP26, the UN conference on climate to be held in Glasgow in November.

We are a new group, but the issues we might pick up on as people of faith might include: “Loss and Damage” – asking the nations at COP26 to ensure that poor countries are compensated for the effects of climate change that are not their fault; Establishment of the “polluter pays” principle.

If you are interested in joining the group please email communities@manchestermethodists.org.uk

An example of the type of work we hope to undertake is this vigil organised by the Manchester Quakers recently on the steps of Central Manchester Friends Meeting House (Mount St) a week before the G7 talks to be held in Cornwall, to call on the Government to: 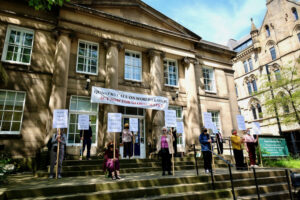 They distributed leaflets with the following information:

FOR WORLD PEACE, FOR GLOBAL JUSTICE AND

WE CALL ON WORLD LEADERS, INCLUDING BORIS JOHNSON

TO GREATLY INCREASE THE FUNDING OF SUSTAINABILITY WORK

Here are some reasons why

It’s we rich countries, through early industrialisation, who have emitted most of the carbon dioxide and created the greatest crisis humankind has ever had to face. The profits from slavery played a big role in this.

As with the pandemic, we are not safe until everyone is safe. Each nation’s creation of carbon dioxide affects every other nation. Global justice is an aspiration that is right … but it is also in our self interest.

Climate heating will affect food production all over the world. We must limit the heating.

The hotter the world is on average, the greater the misery that will force huge numbers of people to flee the heat, the droughts, the floods, the storms or the rising sea levels. The search for countries of asylum will greatly intensify.

Conflict and wars over scarce resources, not least of water, will become almost certain

We can surely do better than just let this happen!

People were then invited to sign a postcard to let the leaders of the G7 know that we want them to do more urgently! Don’t worry if you missed this opportunity Christian Aid offer a template postcard message here.