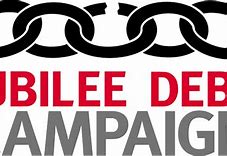 You may remember Jubilee 2000 which was an international coalition movement in over 40 countries that called for cancellation of third world debt by the year 2000.

In May 1998, 70,000 people took to the streets of Birmingham and formed a ‘human chain’ around the city which was then hosting the G7 summit of world leaders. The thousands of people who filled the city centre were ordinary people calling for debt cancellation for the world’s most indebted countries.

It is important to say that his was unpayable debt which was affecting ordinary people in these countries because debt payments were preventing spending on among other things healthcare and education.

You may have been in Birmingham that day and were part of the chain around the city! 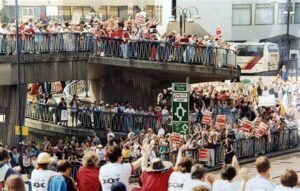 Between 2000-2015 the global Jubilee campaign won $130 billion of debt cancellation for developing countries. And crucially, gave those countries a voice.

Jubilee Debt Campaign, emerged from this activism and has evolved. In the last twelve years the debt crisis has ‘come home’ to Europe, and today we understand that debt cancellation is just one part of the complex picture of debt justice for countries around the world. We are now much more aware of Climate Change in the poorest countries.

JDC continues to work alongside our allies in heavily indebted countries of the global south, such as Mozambique and Ghana, as well as working on the issue of personal debt here in the UK.

Coronavirus will/is inevitably making the situation for companies and individuals much worse.

This webinar will include several guest speakers to give more insight into the current situation. To register, follow this link:-

Cancel the debts of countries in the global south – online petition

The economic turmoil caused by coronavirus is pushing indebted countries deeper into crisis.

While millions of us are struggling to cope with coronavirus, the economic and health impacts could spell disaster for countries in the global south. The cost of borrowing has gone up dramatically, and they are getting less money for products like copper and coffee, on which their economies depend. Lower-income countries are due to spend $40 billion on debt payments in 2020 alone.

All at a time when countries need to be ploughing every spare penny into their health systems.

This summer at international meetings world leaders and finance ministers have the opportunity to protect some of the world’s least well-off countries, by agreeing a new deal for debt cancellation. But that will only happen if we call on them to act.

The UK has a lot of influence at these meetings. JDC is calling on the Chancellor, Rishi Sunak to lead the call for debt cancellation.

All we can Ukraine appeal
Chain Reactions