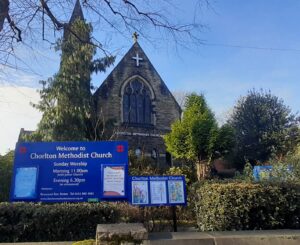 Our congregation is a diverse mix of people from different cultures and backgrounds. We aim to provide a safe space and be a support for all who wish to explore the Christian faith, life or spirituality. We work closely with other local churches.

We try to use our building and garden to serve the community. We are developing our garden to be more wildlife friendly.

In 1770 on the village green in Chorlton, appeared a red coated soldier and a few friends from the Cavalry Barracks in Hulme and preached the first Methodist sermon here. He must have been well received because soon after that meetings were being held in barns and cottages in this quiet agricultural area, four miles from Manchester.

One of the most enthusiastic families to take up the new teachings were the Brundretts, and in 1805 Jeremiah Brundrett, a farmer, gave some land in Beech Road and a generous sum of money to build a chapel, the foundations of which he dug himself. This soon became too small so in 1826 a new chapel was erected on the same site.

The cause continued to prosper, so it was decided to build a larger chapel on a new site. Land on Manchester Road was bought and in 1873 the present building was erected in the Gothic style popular at the time, the architect being John West of Manchester.

The Primitive Methodists were also represented in Chorlton, the High Lane chapel being opened in 1902, but meetings had been held for some years before this in the house of the Principal of Hartley College also on High Lane. The two societies merged in 1960 on the Manchester Road site

Together we continue to witness to Christ in this area, adapting to the needs of the present age and welcoming all in His name.

Click on the icon by each row to show information for all available dates. Click on Column visibility to choose which columns to show / not show.